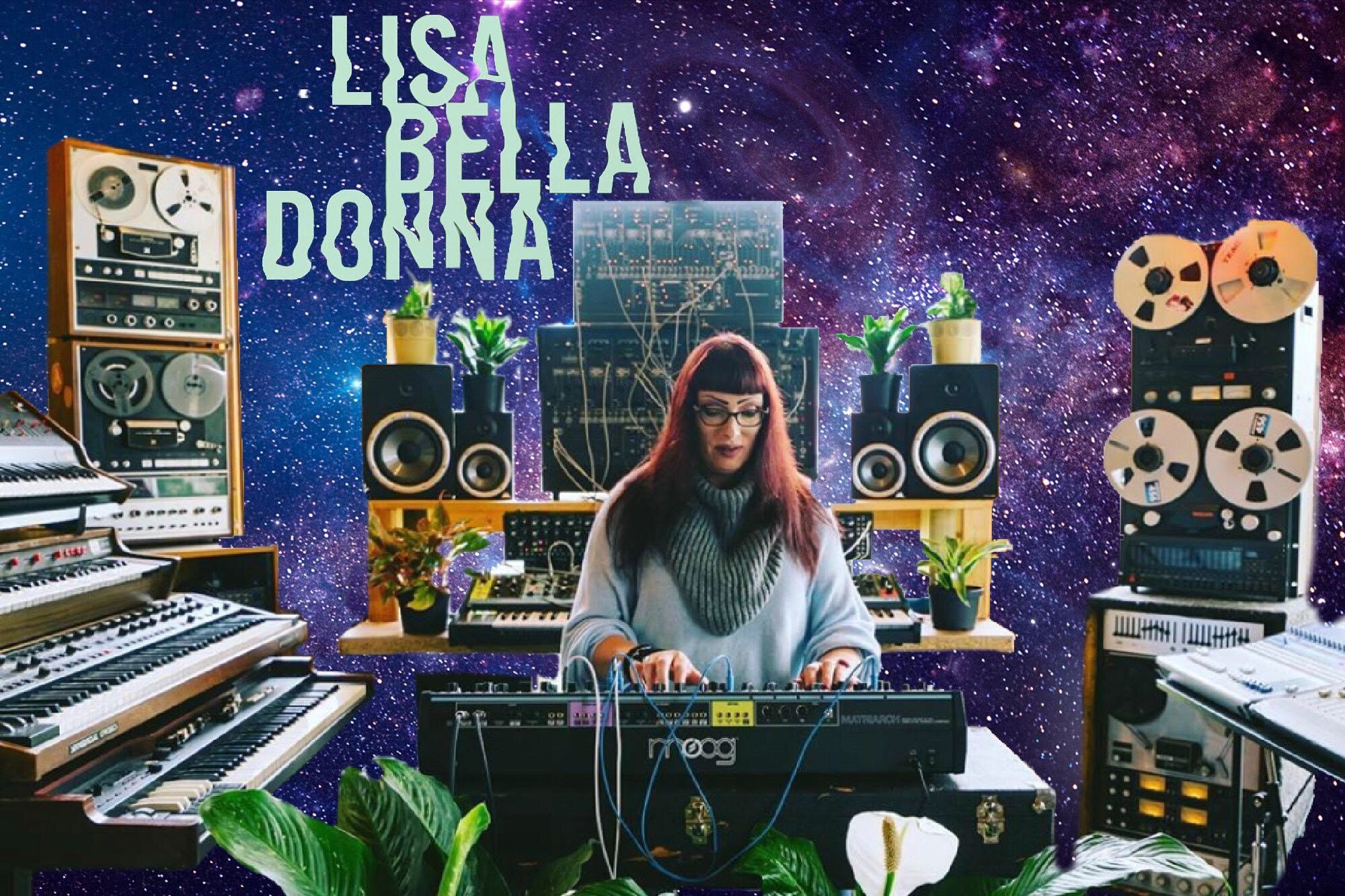 Synth virtuoso Lisa Bella Donna talks about her inspiration, recording process and how to get started in modular synthesis.

Her latest EP entitled Odyssey is out now on Buenos Aires label LiveActs/Omnia.

Hi Lisa, thanks for chatting with us.

Connor: You have an extensive back catalogue, when did you start recording and how did you know you were ready to release your music?

Lisa: I’ve been composing and recording music since the mid/late 80s, however my first album was a cassette release of an all ARP album in 1994 entitled Snowy dreamscapes (which was remastered & re-released in 2019). Composing and recording records has always been my first and favorite love. I consider myself a recording artist first and foremost. So I felt after all the full year of hard work and time I invested into Snowy Dreamscapes way back then, I was ready to release my music and send it out into the world.

Connor: The single take sessions I’ve seen you record for Moog are very impressive, are these meticulously planned or do you find yourself following where the song progresses?

Lisa: Thank you! Songs like “La Nodriza (The Mothership)” and “Mystery Rituals” are live streams of consciousness: ‘instant compositions’, 100% improvised. I spent many years as an internationally touring jazz keyboardist & drummer, so I find with these kinds of pieces I approach them very much in the same way. Regardless of the stylistic intentions, compositions like “Adjacent Omens” and “Hero, Hero” are more composed with passageways for improvisation and colorisation of the thatchwork of each structure or movement.

Connor: Watching your live performances there is an obvious mastery and understanding of the instruments you’re playing, is there a single, seminal live music performance that inspired you?

Lisa: In the early 90s, I spent four days witnessing Joe Zawinul Syndicate perform six sets a day. Four, one hour sets during the day at a convention and then two, 90 minute sets a night at the Catalina in Los Angeles.

Joe Zawinul was already an immense and key influence in taking up electronic music synthesis as well as jazz oriented music as a personal path. To witness him lead his fiery quintet through different passageways of improvisations in and around his compositions, this many times a day, had an equally intense and miraculous affect on me and my own dedication and approach to music.

I met Joe’s sons, Anthony & Ivan Zawinul and they were kind enough to invite me as a guest of the family at the Catalina. So I had the great privilege and pleasure to meet Joe Zawinul. He was very warm and welcoming and brought me behind his surrounding banks of synthesizers to show me many of his methods and techniques of how he made so many things happen with such economy of movement during the performances. Joe Zawinul was a true pioneer and unparalleled genius of his many crafts in music.

Once in conversation with him he learned that I used a pair of ARP 2600s and a Prophet T8 in my setup, so he demanded that I watch the next night of shows from the very front row, right in front of him! This was a very small, intimate venue so I was literally just inches away from Joe and his setup. During the sets he would occasionally point and shout at me to pay attention to how he navigated certain changes and shifts. Cueing his band with secret hand signals while changing parameters of his synthesizers. Usually through very fast song tempos. When he would shift into another entire phase of his performance, he would look right at me and smile, laughing with great satisfaction and encouragement.

Each night when we would speak after the performances, he would ‘quiz’ me on what he was doing and if I understood the changes he would make during the performance. He would laugh, hug me, give me a kiss on the cheek and tell me to

To say that, this one week intensive experience made a life-long lasting impression on me and my approach to music and synthesis would be an understatement. It sent me home with a drive, inspiration, and clarity that has lasted 30 years and is still going: Go to bed later, get up earlier.

Connor: Do you listen to much new electronic music? Is there anyone you think is really pushing the boundaries at the moment or just really love?

Connor: For many people out there modular synths can be quite daunting, what would you say is the best introduction or ‘first piece’ of modular equipment? And is there a piece of equipment you couldn’t do without?

Lisa: Well, I started learning on an ARP Odyssey, ARP Omni, and ARP 2600 and this was years before the internet and such a broader universal consciousness of electronic music. So it took lots of reading and just putting in bench time with the proper equipment such as oscilloscopes and frequency counters while dialling up sounds or dimensions.

Today, I feel the Moog Grandmother is the most versatile and best sounding way for beginners to really experience the art of the signal path & flow of synthesis. It is the perfect, personal electronic music studio. At this point, I couldn’t live without my modular system (12 various Moog Mother Modules and two ARP 2600). It’s the centrepiece of my studio and the brush and canvas of where I compose the majority of my work. I’m absolutely in love with that system. It has opened up paths through the electronic forests that I only dreamed of prior.

Connor: Can you tell us a bit about your latest EP? I can see an extensive list of gear and tapes, do you use tapes a lot in your recording?

Lisa: My latest release is entitled Odyssey released on Buenos Aires label LiveActs/Omnia. I was very grateful and inspired to work with LiveActs in Argentina again! They are such a passionate and clear collection of artists. After releasing Impressions with them last year, it made perfect sense to continue building rapport and momentum of positive frequency.

As for the music on the album, it is mostly an album of live, in-studio performances and one live recording. “La Nodriza”, is a live filmed performance from the Moog Music Sound Lab Studio in Asheville, North Carolina. “Mystery Rituals”, is a live performance from my studio, filmed by Moog Music for their YouTube collection. “Adjacent Omens”, is a composed piece of music using both older ARP & Moog instruments with new Moog instruments. “Hero, Hero”, is an older live concert recording I captured during an art gallery performance on a pair of Sansui four-track reel-to-reels. I transferred the tapes and added some other colors and textures to complete the piece.

I do rely very heavily on analogue reel-to-reel machines in my work. It’s just been part of the process from the beginning. Of course I love and utilise today’s digital technology that I feel has now finally caught up with analogue in the 21st century. For me, using tape is mandatory for my work more often than not. It greatly biases how I commit to a piece of music. Also, there is so much more room for immediate impressions to be captured and printed right from the start. It is a clearer path for my deep and far reaching intentions of music.

I also prefer mixing manually than in the box. On the same token, I absolutely love the flexibility and recall that digital provides. It’s now a perfect marriage, a truly beautiful and wonderful time to be alive and to be a composer of electronic music. Everyday I awaken inspired and grateful to do the work I am blessed to do.

Lisa Bella Donna’s latest EP entitled Odyssey is out now on Buenos Aires label LiveActs/Omnia. You can watch her live performance on the Moog One here.